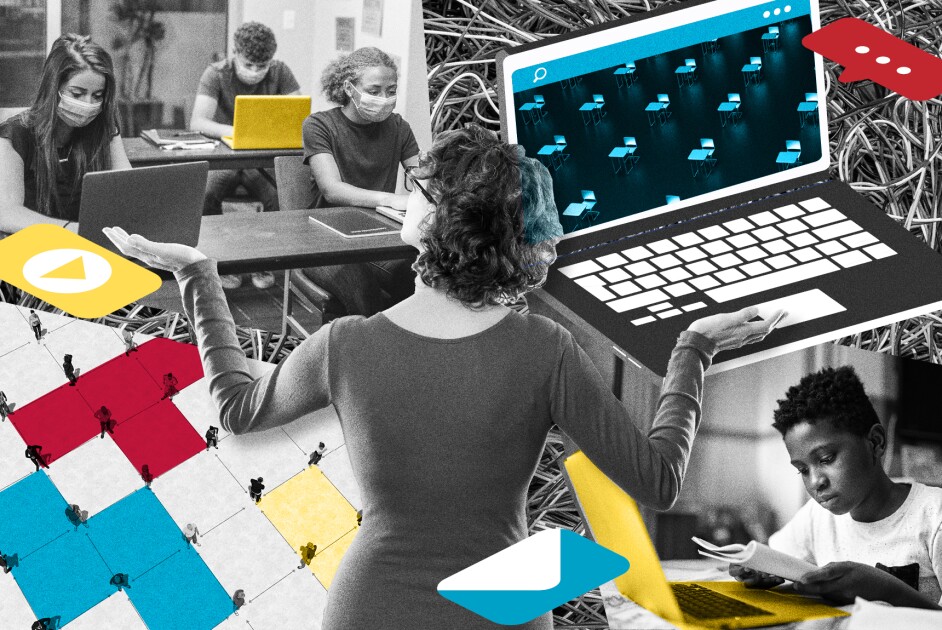 Will the pandemic drive teachers out of the profession? What a study says (Opinion)

If spring 2020 can be characterized as the season of grace, fall has been a disgrace. Amid debates over reopening national and local schools, the focus on public education has shifted from flexibility and forgiveness to restoring the school’s metronome. This included the expectation of teachers to return to their subordinate place in the school hierarchy – and it is here that many schools stumbled upon a missed opportunity to deepen teacher engagement.

Schools across the country, whether offering face-to-face, hybrid, or distance courses, have resumed regular start and end times as well as student attendance, scoring and testing requirements. The reaffirmation of these standards occurred even as the conditions that prompted the spring adaptations were underway. The pandemic continued, students struggled emotionally, and teachers were strained trying to adapt to the ever-changing conditions.

But unlike in the spring, when teachers felt they were part of a concerted effort, teachers now felt silenced and blamed for what others saw as shortcomings in the educational response. They were inundated with a constant stream of criticism, especially when they raised security concerns. Some parents appeared to hold teachers accountable for COVID-19 school conditions that teachers themselves found frustrating. Too often teachers were beset by school decision making that excluded their point of view and often forced them to stick to policies that made no sense in the new context. Emotionally exhausted and not feeling listened to, teachers find it increasingly difficult to maintain the effort required to teach students well.

In the pre-COVID world, research has established two related and important points of importance for post-COVID schooling. First, schools where teachers feel heard and have influence in decision-making are more likely to retain their teachers. And second, schools with high teacher turnover have lower academic performance.– and this is true for all student populations.

Given these links between teacher voice, teacher retention, and student achievement, it is important that 15 of the 75 teachers we followed in our researchâ€”20 percent â€” have left teaching or are actively considering leaving teaching. This contrasts with the typical annual attrition rate of 8 percent for teachers. And it is even more important that those who leave are experienced teachers, with none having less than five years of experience and half having more than 10 years of teaching.

At least once a week I get an email from a parent who insinuates that I have done nothing but try to fail their child, that I have not offered to help once and when I did it wasn’t enough, and somehow it’s all my fault.

Among teachers who are considering quitting their careers, each has identified a similar impulse to quit. They feel thwarted in their efforts to be successful by their students, and they question maintaining a profession that disregards their professional perspective and judgment. In fall 2020, more than half of the teachers in our study reported increased cynicism about their work, while two-thirds were both exhausted from overwork and felt a diminished sense of achievement.

Struggles around hybrid school models have brought the concerns of the voice of teachers to the fore. As schools planned to reopen schools in fall 2020, many teachers spoke out against hybrid models that mix students in person and online in the same classroom. Teaching well in each mode of teaching requires different teaching practices. Blended hybrid education, they argued, exhausts teachers, stretching them in their efforts to do both well, and it hurts students.

In our research, almost all teachers working in mixed hybrid classrooms reported negative effects on student learning. When the teacher’s attention is drawn in several directions, students find it easier to check. As a result, students failed at higher rates than when the classes were all in-person, but also at higher rates than when the students were all online. Teachers made it clear that teaching in one mode at a time positively affected their ability to engage students and cover more content.

â€œThe inaccurate reviews from families have been exhausting and emotionally draining. Their letters to administration, school boards and the state seem an attempt to intimidate us in dangerous or impossible situations that disregard our professional opinions.

Teachers tried to dissuade local school districts from adopting mixed-hybrid models. In some places they have been successful. For example, New York City Public Schools, in conversation with the union, have committed to single-modality teaching assignments. An Oregon school district and its local teachers’ union ultimately negotiated a move away from blended blended education so that every teacher sometimes teaches in person and other times online, but never both.

In other places, usually places where teacher unions had less influence, teachers found it difficult to voice their concerns. In Arizona, a state that in 2012 was considered the weakest teachers’ union in the country, one school district faced a coordinated effort from teachers to make their voices heard. Two-thirds of public comment at a school board meeting on the hybrid models came from teachers speaking out against a mixed plan. The board recognized that such outspokenness and conviction by teachers on an educational issue was unprecedented at the local level. The council nevertheless voted in favor of adopting the mixed model.

Our data includes literature from teachers who have made a decisive, public, and mostly unsuccessful call for single-modality teaching. Often, districts initially adopted mixed hybrid models only to backtrack later as student difficulties, teacher burnout and family concerns increased. Resistance to the voice of teachers, however, resulted in the loss of learning opportunities for students and discouraged and discouraged teachers who sought to leave.

There is a lot of speculation and debate about whether the pandemic will increase teacher attrition. Some observers point to the below-normal exit numbers last summer as proof that concerns are more about noise than substance. Others attribute the low numbers to the state of the economy and the labor market challenges associated with leaving during a pandemic. Teachers in our sample show that there are many reasons teachers may delay leaving. Employment contracts, health care needs, family responsibilities, and the need for a transition plan are all reasons teachers have identified for delaying career exit.

Complacency in the absence of occupational bleeding is a mistake. Given the relationship between teacher turnover and student achievement, the prospect of increased wastage should prompt us to take preventative action. Now is the time to address the concerns of teachers.

This is the third of four essays on the work of education during the COVID-19 pandemic. It is inspired by the research project “Suddenly Distant” by Lora Bartlett and her colleagues..