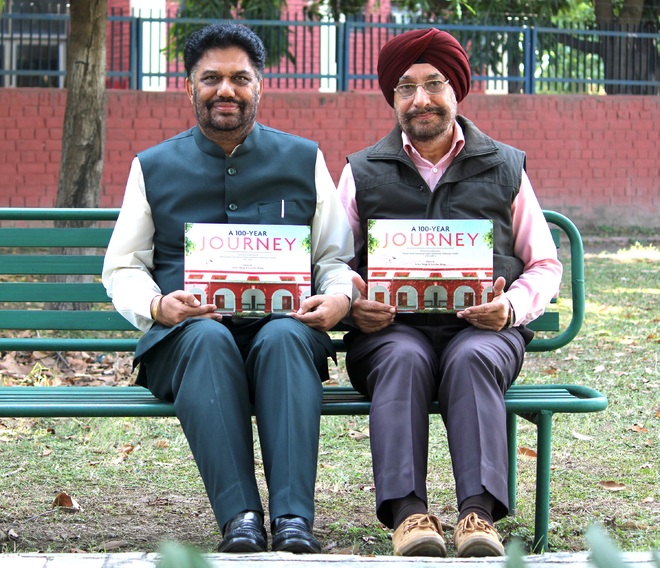 The call of the alma mater: La Tribune Inde

Alumni of Khalsa Senior Secondary School, Garhdiwala, Hoshiarpur, which recently celebrated its centenary, have found a unique way to pay their dues at their temple of learning. Brothers and architects by profession, Sarbjit Bahga and Surinder Bahga from Chandigarh, yesterday launched a book dedicated to their school, which is a compilation of 100 years of its history since its creation in 1921.

Sharing the details, they said, “The book is an anthology containing an eclectic mix of articles and essays illustrated by like-minded alumni of the school. Through these articles, the authors wrote down their memories in the school, exciting anecdotes, tributes to their revered teachers, and introductions to some of the noted alumni. The book aims to record the authors’ love and feelings for the school, which will encourage and motivate future generations of students and teachers.

Delving into its history, the elder of the two, Sarbjit said: “Khalsa Senior Secondary School, Garhdiwala, is one of the oldest schools in the region which serves the rural belt of Hoshiarpur district. It was established in September 1921 through the serious efforts of visionaries such as Subedar Sham Singh, Subedar Mall Singh and another friend. These three retired Indo-British Army JCOs felt that education was the only difference between Indians and British. So, they decided to found a good school in this region.

Surinder Bahga explains how the plan to write a book was conceived and finalized: “About a year ago, during an informal conversation, my older brother shared that our school was turning 100 years old. He suggested that we should float this idea with the school administration. We spoke to many old school friends, teachers, and authorities. The school administration formed a committee to map out the plans for the centenary celebrations. Proposals such as improving the entrance to the school, creating literature, installing a statue of Baba Banda Singh Bahadur have been finalized. Many former students, teachers, friends have chosen to donate to the cause. This school book is a small contribution from Sarbjit and I for this noble cause.

Apart from that, the book also contains brief biographical introductions to some of the school’s noted alumni. Illustrated sections such as “School in Pictures”, “Group Photos – A Frozen History”, “Sweet Memories of the School” and “Centennial Celebrations” are other interesting features of this book. The last chapter of the book contains a Punjabi poem, “Yaadan di Shatabadi” by Gurpreet Singh Dhugga. It sums up the whole history of the school in a poetic version.