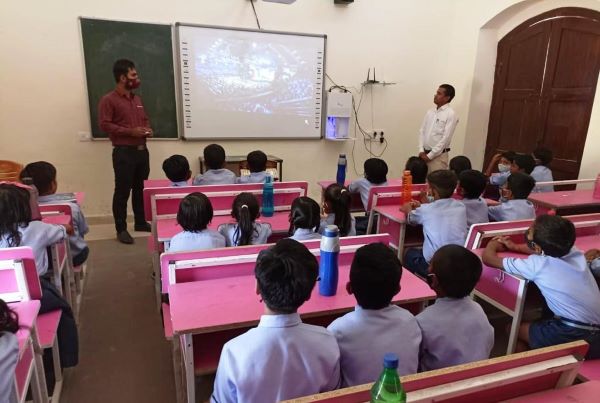 Education, besides health care and economic growth, is an important parameter to assess the development of a nation.

If a nation invests in education, it reaps huge returns in multiple ways. And Chief Minister Mr. Bhupesh Baghel has made such a huge investment in the form of Swami Atmanand Excellent English Medium School that many generations to come will reap the benefits of this investment.

The world is rapidly transforming into a global village, and only those who can match the speed of this progress and evolution can succeed. It has been observed that even the most talented children often miss opportunities because they cannot communicate in English. Every parent wants their child to receive a quality education at a good English middle school, but not everyone can afford the high tuition fees at private schools.

The Chief Minister, Mr. Bhupesh Baghel, took this issue into consideration and created a solution in the form of the Swami Atmanand English Medium School Scheme. Schools opened under this program not only provide quality education in English, but also focus on comprehensive holistic development of children. Through this program, quality education and infrastructure have been made available in rural and forest areas of the state, not just in the capital city Raipur.

Swami Atmanand schools have been equipped with well-equipped libraries, a sports field, a practical laboratory and various other facilities to help children make the most of their potential. To deepen the connection of the younger generation with the Hindi language and indigenous culture, the Chief Minister has decided to open Atmanand schools in Hindi as well. Moreover, local dialects have also been included in the school curriculum, so that children can be proud of their culture, traditions and identity.

The first Swami Atmanand School was opened in the state on July 3, 2020. In the same year, 52 schools were opened in different cities. However, at the time, the number of students admitted here was less. Yet, the number of applications received in the first year was over 20,000. Gradually, these schools gained popularity and the number of applications increased significantly. In the year 2022-23, over two lakh 76,000 applications were received. Considering the huge influx of applications and growing popularity of the schools, the state government decided to open more Atmanand schools in various parts of the state. At present, 279 schools are functioning in Chhattisgarh, of which 247 are English language schools and 32 are Hindi language schools. Chhattisgarh government has planned to open 439 Swami Atmanand schools in Hindi in the next academic session.

The vision of Chief Minister Mr. Bhupesh Baghel behind this program is to create educational institutions in Chhattisgarh that have excellent facilities on par with private schools but are also accessible and affordable for parents economically weaker sections of society. In the same sequence, former public schools have been identified to make this system a reality. First of all, the infrastructures have been reinforced in these schools, the buildings have been renovated, the classrooms have been revamped, the old blackboards, the green boards have been replaced by smart boards. The old bench-table has been replaced by new comfort lot desks. New practical laboratories have been built and equipped with modern scientific equipment.

The most important requirement in a school is a teacher. Therefore, to meet this requirement, English language teachers were recruited by delegation from other schools. In addition, expert teachers have been recruited under contract. Training programs have been organized for teachers. Smart boards were installed for an interactive teaching-learning experience with audio-visual aid. This made it easier for the children to understand the subject.

At the BP Pujari school in the capital city Raipur, where the number of students in the past was only around 100, it has now risen to over 1000. Speaking of the Atmanand Tarbahar English School in Bilaspur district, the number of students in the then school was about 124, but after it was converted into Atmanand school, more than 800 students enrolled here. As applications began to pour in, the school management had to resort to a lottery system for selection and admission. The number of students enrolled in the year 2021-22, which was 41 thousand 745 lakh before, has now risen to 2 lakh 31 thousand 403 in 2022-23.

The Swami Atmanand School Program has positively transformed the structure and infrastructure of education in Chhattisgarh. Students here benefit from all the opportunities for growth and development, just like private schools in the metropolis, all for free. The program has yielded extremely positive results. During the Chief Minister’s Bhent-Mulaqat programs, people come all the way to meet Mr. Baghel and thank him for this initiative. The request to open more Atmanand schools was also received during the Bhent-Mulaqat visits. It is known that Swami Atmanand was a great figure in Chhattisgarh who raised awareness of the importance of education in the tribal areas. Swami ji’s teachings and messages have reached every nook and cranny of Chhattisgarh today, all thanks to the efforts of the Chief Minister, Mr. Bhupesh Baghel.