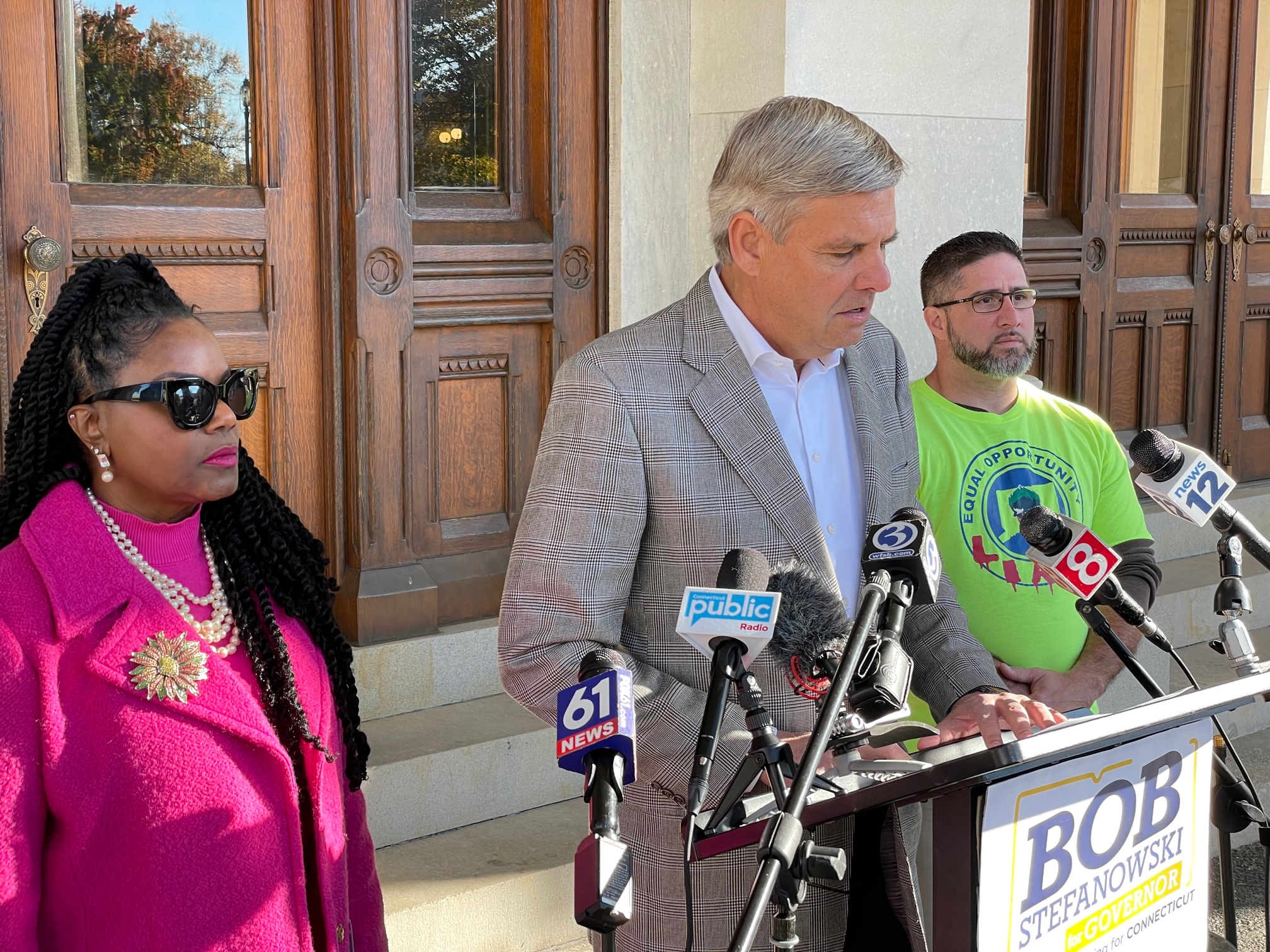 Stefanowski takes on Lamont’s response to COVID and discrimination

Republican Bob Stefanowski aligned himself Thursday with the black public health commissioner whom Governor Ned Lamont fired at the start of the COVID-19 pandemic and a current state employee whose claims of discrimination have been discredited by a federal judge.

Five days before the election, Stefanowski retraced two disparate lines of attack attempted months ago, condemning Lamont’s response to COVID-19 and suggesting the governor’s administration is indifferent to racial discrimination.

But his ostensible focus on COVID deaths was complicated by two guests who shared the microphone, each more determined to talk about their race-tinged workplace grievances than public health politics and performance.

One was Renee Coleman-Mitchell, who is suing the state for his dismissal after just over a year as public health commissioner. She reiterated that she was fired because of her race, gender and age, not because the governor lost faith in her leadership at a pivotal time.

Stefanowski also introduced Luis Ortiz, who repeatedly confronted the governor with video recorders at public events, challenging him over allegations of racism at the state Department of Transportation. Ortiz has twice lost in federal court for discrimination and retaliation.

If the goal was to get voters to reassess Lamont’s generally hailed handling of the pandemic five days before the election, Stefanowski found himself competing with the agendas of Coleman-Mitchell and Ortiz.

“I became disillusioned and disappointed when I experienced racial discrimination, which resulted in the unjustified oppression I suffered because of the intentional efforts of the governor and his administration to humiliate, erase, discredit and cruelly attempt to ruin my 30+ years, unblemished reputation and contributions to public health,” Coleman-Mitchell said.

Stefanowski presented Ortiz as evidence of Lamont’s insensitivity to discrimination, without mentioning that Ortiz’s claims were twice denied in federal court or his habit of chasing after Lamont at public events.

Ortiz, who is still employed by the DOT, said he began confronting the governor after he was ignored by his union and the Legislature’s Black and Puerto Rican caucus.

“After years of ignoring him, I started following him and asking him to answer why he ignored all of us, his registered voters, the working minorities in his state,” Ortiz said. “And he has no comment. I have been called a troublemaker because I fight for minority rights.

His comment was interrupted by a hip-hop ringtone that he struggled to silence. Stefanowski reached out for his phone, but Ortiz refused.

U.S. District Court Judge Jeffrey A. Meyer ruled in February that Ortiz had presented no evidence that a paid suspension and denial of a raise constituted retaliation for his first trial. Instead, the judge noted that Ortiz had been disciplined three times before his first trial and that the suspension was due to inappropriate notes given to a supervisor.

When one of his notes was removed from a locker room, Meyer wrote in his decision granting summary judgment at the state, Ortiz posted another, this time with a homophobic slur: “Whoever took ‘my’ newspaper, your mom is a man and your dad loves that about him. Fake news.

Coleman-Mitchell, not Stefanowski, invited Ortiz to the press conference, said Sarah Clark, a spokeswoman for Stefanowski. But Stefanowski waved for him to speak, though he eventually walked away as Ortiz complained his union wasn’t backing him and the press didn’t ask him any questions.

The first days of the pandemic

The original purpose of the press conference was to challenge Lamont’s insistence during their debate On Wednesday night, Stefanowski was wrong to claim that Lamont negligently sent COVID-positive patients to nursing homes after they were discharged from overwhelmed acute care hospitals.

“We need to protect our most vulnerable. Seventy to 80% of COVID deaths were people over the age of 65. And just like Governor Cuomo did in New York, Governor Lamont placed COVID-infected patients discharged from hospitals in nursing homes,” Stefanowski said during the debate.

“First, let’s set the record straight,” Lamont replied. “No one has handed over COVID-infected patients with the general population in nursing homes. It is absolutely false. Fortunately, we had empty nursing homes. We were able to put them there, and we had wings that were closed. We were able to do that. Please check these things out, so I don’t have to be the only fact checker.

“It happened. There were no regulations for COVID, I understand. It was once in, hopefully, once in history [event], I understand. But the governor has to step in and say he made a mistake,” Stefanowski said. “People who have lost loved ones deserve it. And he needs to stop lying about it.

Coleman-Mitchell offered no clear answer to a fundamental question of whether Lamont, or even the state, was actually placing COVID patients in nursing homes, let alone the more complicated question of what was best practice. in the early and evolving weeks of a pandemic that threatened to overwhelm Connecticut hospitals.

“As I continually say, I was taken out of the process very early on. That means my authority was taken and given to the government. The decision making was also taken from me,” Coleman-Mitchell said.

Matthew V. Barrett, chief executive of the association that represents nursing homes and assisted living facilities, said the state hadn’t coerced patients, and that wouldn’t have been bad practice, if they had been properly isolated.

“There was never a warrant. There has never been a need for nursing homes to accept COVID-positive patients for residents,” Barrett said.

At the request of the state, at least four closed nursing homes have been reopened as recovery centers for patients who no longer needed acute hospital care but were too ill to return home.

Nursing homes were hampered in the early weeks of the pandemic by a shortage of masks and other protective gear, a lack of testing to detect the new virus, and the misguided, albeit widely held, belief that transmission was not possible from people who were asymptomatic, Barrett said.

“Identifying which ones are positive, which ones were positive, and then separating them or isolating or quarantining strategies, which weren’t there at the start of the pandemic,” Barrett said.

Barrett said the state was being aggressive in limiting visits to nursing homes and reserving the first batch of COVID vaccines for staff and residents of long-term care facilities and hospitals. Coleman-Mitchell said she recommends banning visitors.

The death toll in nursing homes was undeniably horrific, especially in the early months.

As of July 30, 2020, less than five months after the first case was detected in Connecticut, approximately 72% of the state’s 4,432 total deaths from COVID-19 were people in nursing homes and assisted living facilities. . As of Thursday, the statewide death toll attributed to COVID was 11,478.

Democrats were ready for the press conference with a rebuttal from Sen. Saud Anwar, D-South Windsor, a physician specializing in pulmonology and a master’s degree in public health. He made no effort to minimize the losses.

“Each deceased person is an important person to us as a State of Connecticut and to their family members,” Anwar said. “And it also comes from a place of pain on my part, as I lost two brothers to COVID during the pandemic.”

Anwar said sending patients back to nursing homes was best practice at the time, although he acknowledged that a lack of masks and other PPE, along with the initial shortage of tests and the absence of vaccines, made the spread difficult to contain once the virus had reached a nursing home.

Hospitals were reeling at the time, he said.

“So as soon as the patient got better, those patients had to be transferred to COVID recovery facilities. It’s common sense. That’s what was recommended, and that’s what was done,” Anwar said. acute needs.

Stefanowski said he would have planned better and the recovery facilities were ready sooner.

The Lamont administration commissioned a review by Mathematica, a research consulting firm, that first summer that concluded that the planning and coordination could have been better.

Coleman-Mitchell complained that the governor’s chief operating officer at the time, Josh Geballe, was assigned as the overall coordinator of the state’s response and that she was sidelined while the governor and Geballe relied on the state epidemiologist and others at DPH for guidance.

Dr. Deidre Gifford, commissioner of social services, temporarily added DPH to her portfolio after Coleman-Mitchell was fired. Gifford is a medical doctor with a master’s degree in public health in epidemiology.

A permanent successor was named in July 2021: Dr. Manisha Juthani, an infectious disease physician at Yale School of Medicine.

Stefanowski was asked if a governor should have the power to remove commissioners at his discretion, whether under the rubric of losing faith in them or for some more specific reason.

“There must be reasons,” he said. “They can’t just be you wake up one morning and you don’t like them. If there are legitimate reasons. Absolutely. People have to be held accountable. »