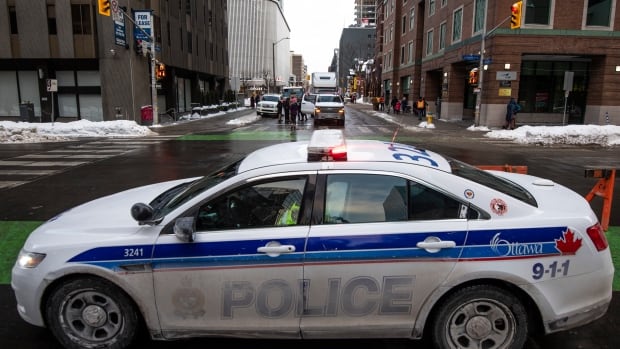 Police continue to closely monitor downtown Ottawa as a large protest against COVID-19 public health mandates drags on into a second day, with the city’s police chief suggesting protests may not end this weekend.

Protesters stormed the parliamentary precinct on foot on Saturday amid an extreme cold warning, joining a convoy of trucks that began arriving at the scene late Friday evening.

They were then joined by other drivers and protesters from all parts of the country, some of whom traveled thousands of miles to take their message to the streets outside the Prime Minister’s Office.

Police estimated that up to 10,000 people could arrive by the end of Saturday, but did not give an official figure.

On Sunday, downtown was once again filled with horns and chants as thousands of people gathered near Parliament Hill for a second full day of protests.

The crowds caused major traffic disruptions in the downtown area, with OC Transpo diverting all downtown bus routes and instead directing passengers to LRT stations.

By late Sunday evening, the Portage, Chaudière and Alexandra bridges were all closed.

The City of Ottawa has an interactive traffic map where residents can check for lane and road closures here. Police said pedestrians and cyclists may also be redirected for safety reasons.

Several downtown civic facilities will be closed on Monday due to the protests, including Ottawa City Hall, the Ice Rink of Dreams and the Main and Rideau branches of the Ottawa Public Library.

St. Luke’s Child Care Center and Pinocchio Educational Center will also be closed, the city said Sunday evening. Garbage and recycling collection should not be affected.

The Ottawa-Carleton District School Board said Centennial Public School will transition to remote learning on Monday, but all other schools will be open.

Reminder: avoid making unnecessary trips this weekend, #OttCity.
If you need to plan your trips, check out the latest impacts on @Ottawa_Traffic or select “incidents” to see them here: https://t.co/yQy1eYQxCC photo .twitter.com/457PSkBnrG

Many businesses decided not to open at all or to close early on Saturday – including the Rideau Center, where protesters flocked all day, often without wearing masks.

Devin Camara, manager of the New Balance shoe store, told CBC how a customer got angry after being asked to put one on.

“He basically called me a narcissist and a sociopath for asking him to do this and not fight for his rights,” Camara said. “I’m just like, I’m just a store owner. I’m just trying to protect my staff from getting something that could possibly kill them or put them in danger.”

Ottawa police said in a statement late Saturday that the crowds were dispersing for the night, but traffic congestion remained a problem.

The force is on high alert for any threats or violence, Const. Amy Gagnon interviewed on Saturday.

In a statement on Sunday, police said they were aware of residents’ complaints about parking, noise levels and inappropriate behavior, but “for safety reasons, protest and traffic management must have priority”.

Police Chief Peter Sloly said it was possible the protest – which does not have a permit – could go on later this week.

Sloly said on Sunday there had been a “peaceful and cooperative approach by the majority of people” in the city, but also that there were growing signs of stress among residents, business owners and protesters.

“The negotiations indicate that some people are leaving from the point of view of the demonstration, leaving the city. That’s a good thing. But there are still a lot of risks that we have to manage to navigate our way.”

Sloly said a “heavy visible uniformed police presence” remains in downtown and other parts of the city with “increased risk”.

“It will go on all night and into tomorrow – and we’ll see what tomorrow brings,” he said.

Sloly said earlier that any decision to end the protest would be based on public safety concerns or a breakdown in communications with protest organizers.

Mayor Jim Watson said Saturday that while the protest was peaceful, the city needed to be able to get back to its routine.

He echoed that sentiment on Sunday, saying many residents had reached a boiling point.

“To be honest, [residents] feel they are prisoners in their own home,” Watson said. Rosemary Barton Live on Sunday.

“And so I hope that at some point the police will come to the conclusion that it is time to have a serious discussion about the displacement of these people.