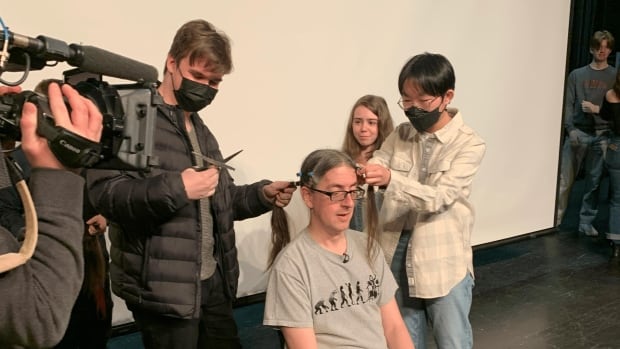 Hachey, who teaches science and French, offered her long hair as part of the students’ push to raise money for the relief effort in Ukraine.

High school teacher Evan Hachey lets students cut his long locks for a good cause at the first student assembly in two years. 2:31

The main event of Friday’s assembly was Hachey having his hair cut in front of the student body by six students chosen by lot.

“The kids were really into it. They discussed giving me a layered look,” Hachey said, after the chop. “They wanted to give me a mule, like they seemed to know what they were doing.”

The haircut will also help young cancer patients – her hair will be donated to BC Children’s Hospital to be made into a wig.

This isn’t the first time Hachey has grown out her hair, then cut it, for cancer survivors. He did the same in 2015 as well.

Students at Saint John High School weren’t just excited about the fundraising effort and the haircut. It was also their first full assembly since the pandemic began.

“We haven’t had an assembly in such a long time,” Hachey said, “so they’re pretty excited to be all together in one place.”

Grade 11 student Chaneil Clements said the fundraising effort meant a lot to her and her classmates.

“We have our mascot, the Greyhound, and we see ourselves as dogs in this situation,” she said, commenting on the students’ enthusiasm.

“It’s not just dogs helping dogs, it’s humans helping humans. And that’s extremely remarkable. I’ve tried to find so many words to say thank you. It’s really something we need in this world. We need more today.”