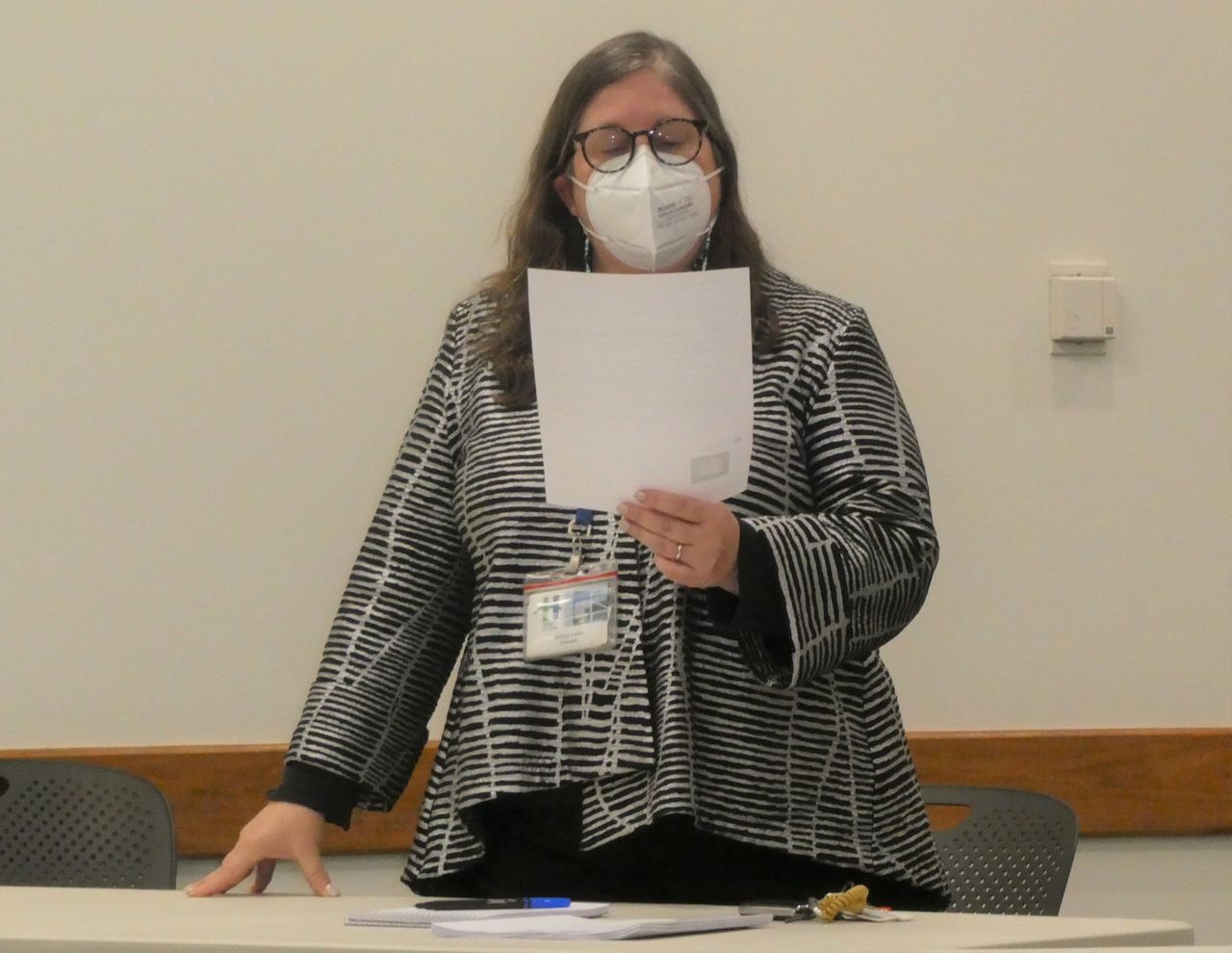 CLEVELAND HEIGHTS, Ohio — Heights Libraries was set to issue a request for proposals Friday, Feb. 11, for management of the former Coventry School building at 2843 Washington Blvd.

Library director Nancy Levin announced the plan in a statement that opened a special meeting of the Cleveland Heights-University Heights Public Library Board of Trustees Thursday, Feb. 10, at the Lee Road branch.

The main objective is to identify a qualified company or organization that can operate the building by providing facilities management, as well as lease management services for tenant spaces, the RFP document states.

Levin said the library’s main goals for this agreement are:

To maintain the building’s federal tax-exempt status, which means all tenants must be nonprofit organizations registered with the State of Ohio and the Internal Revenue Service

· Provide a professional atmosphere in the neighborhood where the building is located and comply with all city and state laws.

A visit for interested candidates is scheduled for 9 a.m. on February 23 in the old school building.

Proposals are due by 4 p.m. on March 1, when they will be publicly opened, Levin said.

On December 22, the council voted 6 to 1 against extending the term of its 2020 lease of the building – which the library owns – to non-profit Coventry PEACE Inc.

The term of the nine-year lease expired on December 31, when it was converted to a month-to-month agreement. That means more than a dozen nonprofits in the 64,000 square foot building are now on month-to-month rentals.

The board also voted Dec. 22 to authorize its management staff to explore other options for managing the property.

In a press release, Heights Libraries claimed that Coventry PEACE Inc. had failed to meet lease requirements that would have allowed it to renew the lease for a further nine years.

But on the Coventry PEACE Inc. (CPC) website it says: “For 15 months CPC operated under a purpose-built temporary lease to be converted to a 99-year lease on January 1, 2022. We have met all of the library requirements for conversion outlined in the current agreement.

Coventry PEACE Inc. is a consortium of local non-profit organizations that have leased space in the building since the library purchased the Coventry PEACE campus site from the Cleveland Heights-University Heights School District in 2018.

“We support non-profit organizations that operate out of the Coventry school building and their missions and services to the community,” Levin said in his statement. “We continue to work in partnership with them on community projects.

“These partnerships are not affected by our lease agreement with Coventry PEACE Inc.”

Levin’s statement continued: “At this time the CPC remains the anchor tenant of the Coventry School building and is encouraged to schedule, promote and coordinate fundraising for its members as it has done in the past.

“Individual tenants are encouraged to do the same, with the understanding that the library is looking for workable proposals to run the building.”

Nature of the meeting questioned

At Thursday’s meeting, six residents spoke to council, which did not respond to their comments, as is its policy.

Amy Hamilton, a University Heights resident who is the attorney representing the CPC board, said the special meeting was “not at all” what was discussed between her and attorney Anthony Trzaska. of the library, regarding the type of meeting which was to be .

“We offered three days in anticipation that there would be a discussion,” she said. “It was never anticipated that the answer would be to notice a public meeting, as opposed to a meeting with some of our members and some members (of the library board) to discuss issues important to both sides. .”

Deanna Bremer Fisher, executive director of Future Heights – tenant of the Coventry building – spoke on behalf of the CPC Board. The Cleveland Heights resident also said the CPS asked to meet directly with members of the library’s board of trustees at a “business meeting, and it’s not that meeting.”

“We believe your decision not to convert our lease in December was made with outdated information, and tonight we heard plans to privately manage the building,” she told the board. administration.

“This was explored in 2018 and 2020 and both times rejected by library staff because it was expensive and duplicated services already provided by tenants at no cost to the library.

“We therefore renew our request for a board-to-board meeting, a meeting of partners sharing mutual respect. And in the meantime, we will continue to welcome potential new tenants and plan community events.

Robin VanLear, creator and co-director of Art Acts, a performance art company that is a tenant in the building, said that since moving into the building two years ago, messages that she received from the library are inconsistent.

“What really bothers me is that when I arrived I worked very hard with the members of the Coventry PEACE campus,” she said. “We spoke to many different types of funders and people who could support our mission.

“The word I got was that (the library board) didn’t think we could make it, that you thought we were going to fall on our face and where would you be then, because there would be a levy at come and you would look bad.

VanLear, an artist from Cleveland Heights, said if the library hired an “outside contractor” to manage the building, and it resulted in increased rent for tenants, “so many of us will leave.”

“The community will disappear,” she said. “I’m going to leave Cleveland Heights because there’s no other place, and I don’t want to be an artist on my own.

“I would like (library board members) to come and visit us before you decide if we can do this on our own, if we can access the pledges we had, give us funding for our own manager – a manager we know would contribute to what we want and need.

“We could do that in Cleveland Heights, but you won’t let us. You are holding us back. You hold us with your puppet strings. Let’s give ourselves a chance.

Carol Laursen of Cleveland Heights said she was a member of Lake Shore Aikido, a martial arts school that entered into a short-term deal with Coventry PEACE Inc. to rent space in the building before the library board does not vote not to extend the lease.

“Coventry PEACE Inc. was very kind and worked with us, and we were about to sign a (long-term) lease in December with the expectation that Coventry PEACE Inc. would retain control of the building,” she said. “Then when it was taken down, we couldn’t continue with a month-to-month lease.

“So hopefully we can find some kind of way that this community can be owned and supported and be responsible moving forward.”

Why ‘this sense of entitlement?’

Garry Kanter of Cleveland Heights said he couldn’t understand why there was “this sense of entitlement” among tenants renting space in the building.

“Why are taxpayers, via the library, supposed to subsidize a (64,000) square foot building?” He asked. “What are the opportunity costs (for) the other things the build could do? Well, we don’t know.

“Somehow 15 years ago someone kind of just moved in because it was empty anyway. Now, 15 years later, someone is wronged. No, you are not wronged. This meeting being public is fair; the analysis is correct. For the first time, it’s done the right way.

After the former Coventry Elementary School closed in 2006, the CH-UH School District began renting space there to nonprofit organizations.

Amy Rosenbluth, co-founder and executive director of Lake Erie Ink, another tenant in the building, said her biggest concern going forward was with tenant leases, as she felt that was not addressed in Levin’s statement.

“We’re in the middle of our winter lineup — we have a huge event on March 3 — but I’m about to announce the summer lineup, and it’s very difficult to announce it,” she said. . “When would leases come to tenants or CPC?”

The board did not respond. But in a previous interview, Levin said, “We are committed to working with the tenants and hope they all stay.”

VanLear asked if she could speak again.

“I think if we could move on to where we are your family, but we’re on our own now and you don’t have to handle things for us, I think we’d all be in a happier position,” she said. noted. “But I think we need an opportunity to get to know each other and really see what the concerns are.

“I just wish we could get to know each other and not feel like adversaries because I really don’t believe we are.”

Board Chairman Gabe Crenshaw then moved to adjourn the meeting.

At its next regular meeting at 6:30 p.m. on February 21 at the Lee Road branch, the board will vote on a proposal to retain Allegro Real Estate Brokers and Advisors of Cleveland to conduct a survey of the property.

Levin also said Debbie Herrmann, who serves as the library’s tax officer and council clerk, would take note of every question posed at Thursday’s meeting and that those questions would be addressed in writing by March 1.

Sheryl Banks, the library’s communications manager, said the written statement will appear on the Coventry PEACE campus page of the library’s website.

Learn more about the Sun Press.

‘We should actually get some notes out.’ Philadelphia school district lottery puts family with twins in tough spot – CBS Philly