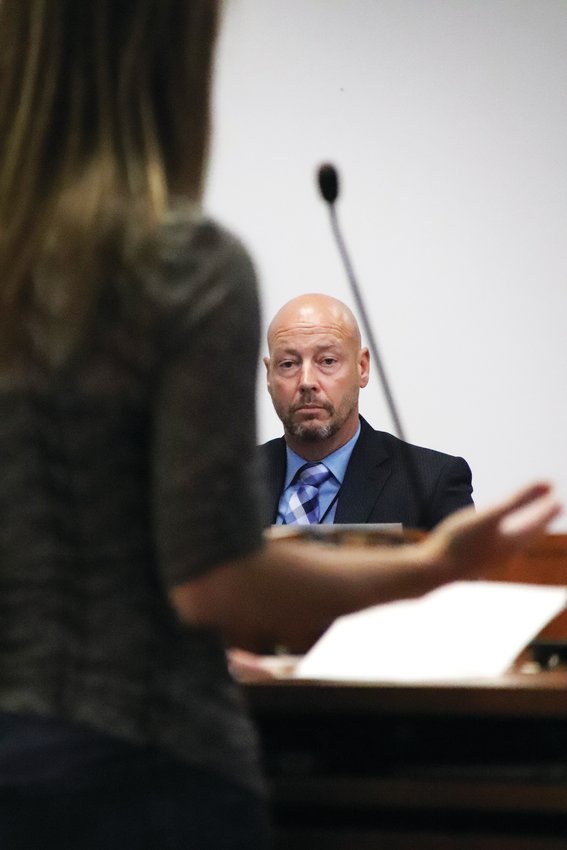 Three members of the Douglas County School Board allege that the four new board trustees gave the superintendent an ultimatum – resign or be fired – without formal board approval and without the knowledge of the entire board.

Directors David Ray, Susan Meek and Elizabeth Hanson made the allegations at a Jan. 31 meeting, where they also discussed concerns that the other four directors violated open meeting laws and board policies. administration by agreeing in secret conversations to take formal action against the superintendent.

Ray, Meek and Hanson were the only directors on the board to attend the Jan. 31 rally, a public notice of which was posted. Ray said at least 1,300 people viewed the meeting, which was held remotely.

Ray said the three are “genuinely concerned that we have a board that doesn’t just follow the law” but also the policies of the board.

“Our superintendent should never be caught off guard with us saying you’re underperforming,” Ray said.

The three directors alleged that the decision to oust Superintendent Corey Wise was made in ‘backdoor meetings’ between directors Mike Peterson, Christy Williams, Becky Myers and Kaylee Winegar, and that they were notified by Peterson and Williams after the two asked Wise to quit.

In response to interview requests from Peterson, Williams and Wise, a district spokeswoman said the two directors did not attend the meeting and Wise did not immediately comment.

During the reunion, Ray, Meek, and Hanson explained how they learned about the alleged decision to remove Wise. The three men had received text messages on Jan. 27 asking them to have brief conversations with Peterson and Williams the following day, they said.

Hanson said she spoke to Peterson by phone on Jan. 28 around 7:20 a.m. Peterson informed her that he and Williams had met with Wise early that morning and requested his resignation, she said.

“I was completely unprepared for this conversation,” Hanson said.

Hanson said she abruptly ended the call with Peterson, which lasted about six minutes, and hasn’t spoken with Peterson or Williams since.

Meek said he spoke to Peterson for about 15 minutes around noon on January 28. She said Peterson told her he had spoken with directors Myers, Williams and Winegar, who agreed they wanted the district to go in a different direction.

Meek said Peterson told him he and Williams had given Wise until Tuesday night to decide whether he would step down, and if not, the board was prepared to fire him.

“He indicated it had nothing to do with a campaign promise,” Meek said.

Meek said Peterson told her that he and Williams had met with the board’s outside legal counsel Will Trachman on January 27 to discuss Wise’s notification, but that she had not received any memos or communications from Trachman at the topic of conversation.

Hanson said she views Trachman’s failure to brief the entire board of directors on the conversation as an ethics violation and a violation of her engagement letter with the board.

Ray said he spoke to Williams mid-morning on January 28 and that she also told him that she had met with Peterson and Wise, “and that they had asked that he consider resigning immediately and that There were four directors ready to step forward to replace him if he chose not to step down.

“I first asked why she felt she and (Peterson) had the authority to escalate this directly to the superintendent, especially since it’s a violation of policy,” Ray said.

Ray said the superintendent can only receive direction through a vote of the board at a formally recorded meeting. Ray said he asked if any concerns about Wise’s performance had been communicated to Wise in writing “and the answer was no”.

Ray said the board is legally obligated to provide an employee with the due process of being made aware of any performance issues and the opportunity to respond or refute those allegations. Ray said Williams indicated the four directors intended to tell Ray, Meek and Hanson of Wise’s view, but said the timing didn’t work out.

Meek said his biggest concern was that “board members have taken actions that they are not authorized to take.” Meek said she understands if the majority wants to vote a certain way, but “it has to be done according to the law.”

“When decisions are made outside of board meetings, I mean it’s forbidden,” she said.

“In this situation, we must balance the confidentiality of our superintendent and personnel matters while fulfilling the oath we each took as elected officials,” she said.

To remain silent about how Wise was notified would make her complicit in open assembly law violations, she said.

“Colorado’s open meeting law goes beyond limiting the number of board members involved in a private conversation. It requires a government body to discuss public affairs or take formal action in meetings that are open to the public,” she said.

The three directors concluded their reunion by talking about what they hope will happen next. Ray said the board needed to “backtrack” on the “unauthorized” ultimatum allegedly given to Wise. He also hoped that the council would agree to hold a special meeting to further discuss Wise’s employment and the management of the district.

Wise should have the opportunity to decide “am I the right leader for this board” and better understand the board’s expectations of him, Ray said. He asked for more formal discussions within the board of directors on an evaluation of the superintendent’s performance rather than termination.

Hanson said she was considering filing an ethics complaint against Trachman and informing the board that her conversation with Peterson and Williams was a breach of contract.

“No matter how divided our community is, I sincerely hope that we can agree as a community that our superintendent, who has dedicated 26 years of his life to our district, should be given a basic standard of decency and procedure. “, said Hanson.

We believe vital information should be seen by those affected, whether it is a public health crisis, investigative reporting, or holding lawmakers accountable. This report depends on the support of readers like you.