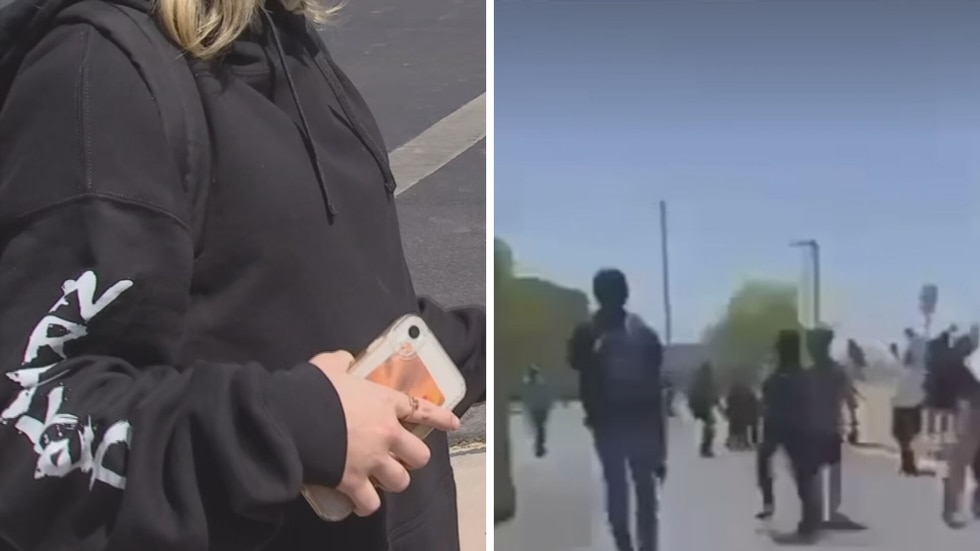 ANTHEM, AZ (3TV/CBS 5) – A bomb threat at Boulder Creek High School in Anthem led to a chaotic scene of students leaving campus for safety last Thursday. The school was closed to investigate the threat while hundreds of students were in the cafeteria for lunch.

‘I went to look like someone I knew in the cafeteria and a teacher came up to me, and they say this is not a drill, everyone has to stay safe,’ said a sophomore year.

Then everything changed and fear set in.

“The kids were like jumping around like loud bags of chips, which echoed through the cafeteria, so it sounded like gunfire, then they saw people running, so everyone started running, and it caused a massive panic, so everyone was falling on top of each other, there was food everywhere, tables were falling and everyone thought it was a shooter,” said the second.

A mother, who wanted to remain anonymous, said her child texted her saying there was a shooter.

“I found out what happened when my child started sending me a series of frantic text messages, explaining that there was a lockdown, that they were scared, that they didn’t know what to do and that it turned into an evacuation,” she said. “My kid was running around and saying he couldn’t find anyone, he didn’t know what to do, there was a shooter on campus or something had happened. “My child had very little information about exactly what was happening and the real plan, but he was scared and kept saying he didn’t want to die and he didn’t understand what to do, and that he was afraid.”

The mother said her child was in a classroom being evacuated, but once the students saw everyone running, they ran too. “It wasn’t until they came out and everyone was running all over the place, and the administrators or at least the adults there – teachers and other adults – were yelling at the kids to go, run “, she said.

During the chaos, several students were injured, according to witnesses. “I know a lot of kids who were in the cafeteria were being trampled on like they were being stepped on; I know I stumbled across it,” the second said. “I saw people with bruises, cuts from the fences, I saw ripped clothes.”

Once the bomb threat was confirmed as a hoax and the lockdown was lifted, the principal sent a letter to the parents along with an automated phone call. “During today’s lockdown and partial evacuation, some students chose to flee off campus, which is unsafe behavior and could put them at risk,” the robocall said.

The principal urged parents to talk to their students about staying on campus and following instructions during events such as a lockdown.

This response from Boulder Creek High School did not sit well with parents or students. “I thought it was extremely dismissive and indicative of what continues to be this culture of dismissing the thoughts and perspectives of children, discrediting any information they bring,” one parent said.

“There’s a sort of automatic perspective that children somehow operate from a place of deviance or malevolence. I can tell you that for the overwhelming majority of children who feared for their lives, the last thing on their minds today was the day they would suddenly become delinquents and miss school. It was a place of fear. »

Over the weekend, the principal sent another email to the parents saying she did not have all the information at the time of her initial response.

“The information that took a lot longer to figure out until after investigating and talking to parents, staff and students on Thursday evening and throughout the day on Friday is that there is were events and circumstances that prevented students from hearing and understanding PA instructions within the cafeteria that led to a situation that created panic and fear. I apologize to our students and parents that we did not understand the full picture when I sent the initial communication. My intention was to communicate what happened with the initial threat situation that caused the lockdown and to remind families of the importance of following lockdown procedures. There is absolutely no blame for our students in their response to the immediate circumstances they faced that day. I also commend our students who helped their peers seek safety and those who worked to calm and support their peers. I am so proud of the students who have shown kindness, selflessness and caring.

Minister of Education: Guidelines for school management, operation 4.0 will be announced soon | Malaysia

Cash On Your Mobile indicates the benefits of fast cash loans