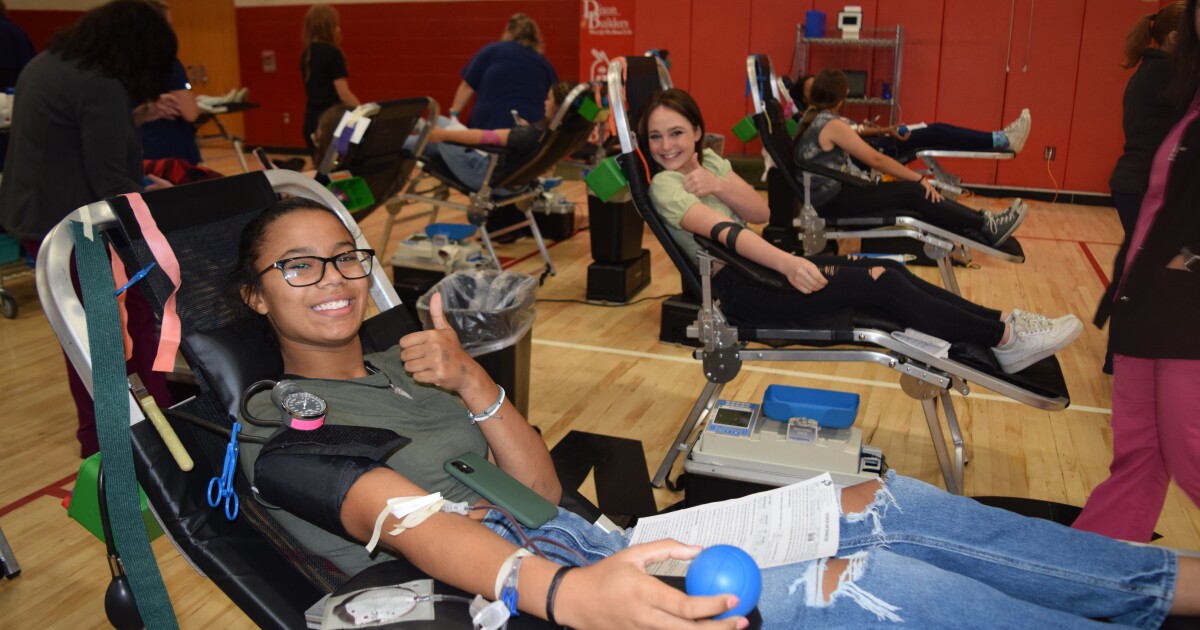 Blood donation is essential and the centers know the importance of reaching new donors when they are young. High school blood drives were sparse during the pandemic shutdown and didn’t fare much better after many students returned to class in 2021.

Now blood centers are gearing up for what they hope will be a better school year.

For the region’s two blood center agencies – CBC, which is based in Dayton and serves 15 southwestern counties in Ohio and Indiana, and Hoxworth, based in Cincinnati and serves 18 southern counties -western Ohio, northern Kentucky and southeastern Indiana – reaching potential future donors when they are in high school is imperative.

“These students are our next generation of blood donors,” says Jackie Marshall, public information manager at Hoxworth. “Reaching students when they are young and showing them the impact donating blood has on a community is vital to the local (and national) blood supply. According to the American Blood Centers (ABC), 11 .2% of blood donations nationwide come from ages 16-18.”

Unfortunately, Pompilio says, high school blood drives did not rebound from the pandemic last year as agencies had hoped. He says CBC saw a 52% drop last year from pre-pandemic levels in the number of children signing up to donate; and an even more crucial metric: a nearly 48% drop in early donors.

“If we lose these kids, they may never donate blood in high school. We may never have them as blood donors as they grow through life.”

“When I go to blood drives now, I meet a lot of juniors and seniors who donate for the first time because they had this gap in their high school experience where they weren’t introduced to blood donation. from the start,” says Pompilio. . “If we lose these kids where they may never give in high school, we may never have them as blood donors as they grow through life.”

While people tend to lose their role as donors in college and early adulthood, Pompilio says people who donated blood in high school are more likely to do so again.

CBC and Hoxworth are coordinating with area high schools to organize blood drives. Both note that high school drives are responsible for bringing in a large portion of blood products during the school year, which they say is critical.

Marshall says Hoxworth is seeing some improvement this school year.

“We’re definitely seeing a slight increase,” she reports. “While we are still limited in mobile operations due to staffing, many high schools are back on our schedules for the school year and we can’t wait to be back!”

CBC’s Pompilio says the agency is also keeping its proverbial fingers crossed that this year will see a marked improvement.

Last Friday, students at Fairfield High School lined up at an auxiliary gym turned into a mobile blood drive center. The day before, Pompilio had expected a modest turnout. Instead, some 150 students signed up.

“It’s like the good old days,” he says, pointing to the busy gym. “I hope it might be a trend, but look what it took to make that.”

The students that day were extremely motivated. The blood drive was organized at the request of a classmate with leukemia who used blood provided by CBC.

Jacob Popp, 17, relaxes in a donor chair. He clutches a blue ball as dark red blood flows from his arm into the collection container. This is the second time he has donated blood.

“I guess what motivated me was just because it’s a common cause, something good to do and it helps,” he says.

Popp says he would also encourage his classmates to donate.

“I would say it’s worth it, honestly, because donating blood…it scares some people. I was a little nervous too. It’s only my second time but it helps people and it’s is good. It’s a good thing.” things to do.”

The folks at Community Blood Center and Hoxworth hope there are plenty of kids like Popp who understand the importance of donating — and who will continue to donate as they get older.

“Blood cannot be made in a lab, so our hospitals rely on volunteer blood donors to provide the products they need for cancer treatments, trauma, pediatric patients, etc. there to step in to our community, which is why high school students are so important to us.”

In general, hospitals use less blood than in the past, but still, 4.5 million Americans will need a blood transfusion each year. Hoxworth reports that he needs 400 blood donors a day and 50 platelet donors.

Pompilio says another good thing about high school blood drives is that they often take place on Fridays, helping blood banks get through the weekend.

how to donate blood