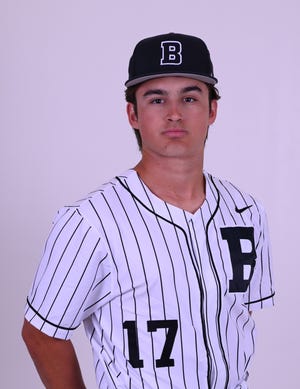 A look at who stood out in Arizona high school baseball for the week of March 21-26:

In a 4-3 win over Basha, he hit a two-run home run late in the seventh inning.

He went 3-for-3 with three home runs, including one Grand Slam, in one game. He had eight RBIs and five runs scored.

In a 16-0 win over five innings, he pitched a perfect game with 14 strikeouts and throwing just 65 pitches.

He threw his second straight shutout with one hit, striking out 10, and gave up just one walk in a win.

He pitched a full game, one hit in a 2-0 win over Gilbert Christian. Also went 2 for 2 at home plate and doubled in the winning run.

He kicked a complete shutout in a 6-0 win at Combs, keeping the Broncos undefeated on the power play and in regional games. He struck out 10, allowing just two hits in seven innings.

The former big leaguer’s son threw a no-hitter in a 10-0 win over Trevor Browne. He struck out 10 and walked two in six innings. He also went 4 for 6 with five runs, two RBIs and three stolen bases.

He went 8 for 12 with three home runs and nine RBIs.

In a 17-3 victory over Youngker, he was 4 for 5 with seven RBIs, hitting for the cycle.

He went 3 for 5 with a double, a triple, a home run, two RBIs and two stolen bases.

He hit five innings in a 4-3 win over Basha.

He went 10 for 13 with five doubles and five RBIs in a 3-0 week. He also struck out six batters in three innings against Shadow Ridge.

He pitched a perfect game against Littleton, Colorado, striking out 12 and going 5 for 11 with one home run and five RBIs in three games.

He went 5 for 10 with six stolen bases in the week.

He went 5 for 10 with a double and two triples.

He had two wins, pitching a total of 9 1/3 innings, allowing six hits, striking out 16, and giving up no earned runs.

He was 5 for 9 with two doubles in three wins.

He threw a two hits in a win over Corona del Sol, striking out 12 and walking two.

The open region is playing with a full game on three hits, allowing an earned run and striking out 11 to beat Florence.

I went 4 for 5 with three doubles and two RBIs.

Brian Lorenz, Northwestern Christian, 1B, So.

I went 5 for 7 with a double and three RBIs.